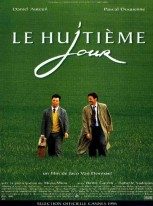 Join us January 25, 2021 from 6:30 to 8:30 pm for our monthly Ciné Club. In January, Alliance Française de Denver will show The Eighth Day, a 1996 Belgian comedy-drama film that tells the story of the friendship that develops between two men who met by chance. Harry (Daniel Auteuil), a divorced businessman who feels alienated from his children, meets Georges (Pascal Duquenne), an institutionalised man with Down syndrome, after Georges has escaped from his mental institution and is nearly run over by Harry.

This film was nominated for the Palme d'Or award, the top prize at the 1996 Cannes Film Festival. It did win the Best Actor award at the festival, which was given to both Pascal Duquenne and Daniel Auteuil. The film was also nominated for a César Award and a Golden Globe award.

This event will be held in the International School of Denver. Please enter at the following address : 7660 E 4th Ave, Denver, CO 80230 (you can park in the adjacent parking lot).